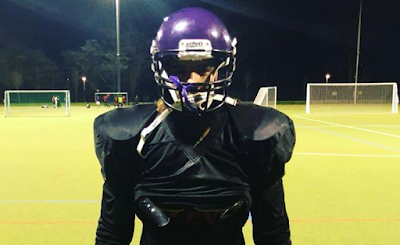 It’s been several years since Eric Jordan felt that funny feeling in his stomach before the first game of a football season.

The former All-Ohio running back from Sandusky High School, who saw his collegiate career at Bowling Green State University cut short by an injury, will make his professional debut on Saturday as a linebacker for Switzerland’s Basel Gladiators.

“I’m trying not to stress too much and just reviewing the playbook, getting mental reps and I’m just focused on playing carefree because I don’t have anything to lose,” Jordan said. “I’m going to enjoy the moment and play every down like it’s my last.”

Jordan, who now stands 6-foot-2, 200-pounds, thought his playing days were over when he suffered an ACL tear in 2012. He then joined the Bowling Green strength training staff and later returned home to Sandusky, where he opened the Nexxt Level Fit Academy to help aspiring athletes and adults reach their physical fitness goals.

Then came a life-altering phone call from former Bowling Green teammate Caleb Watkins, a quarterback for the Gladiators.

“His team needed a defensive player and asked me if I wanted to play football over in Switzerland,” said Jordan who played a year of semi-pro football with the Lorain County Nightmare in Ohio. “That was my first season back playing since Bowling Green, which I led the league in tackles for the season and it helped give me an advantage to getting on the radar with any professional teams.”

At Nexxt Level Fit Academy, Jordan stressed to his clients the importance of pushing hard to achieve the goals they had set and now he was living proof that dreams do come true.

“This is really just not giving up on my dream, pushing myself even after people told me football was over for me,” he said. “It’s has catapulted my life and has taught me how to be tough no matter what life throws at you. Staying positive through adverse times has been the biggest tool.”

Jordan expects to encounter many hurdles during his time in Switzerland.

He has to adjust to a new brand of American football as well as the cultural and language barriers with his teammates and coaches. Even traveling around his new surroundings presents its own set of challenges.

“It’s different adjusting to the language in everyday life with my teammates and getting used to the currency, using Swiss money and Euros,” he said. “Staying healthy is going to be key for me to have a good season and possibly progressing to a higher level of football, maybe in one of Germany’s top two division leagues. The transportation has been the biggest thing, trying to get used to the system of using trains, trams, and buses everywhere I go.”

As for the football, Jordan said it’s very similar to what he experienced playing at Bowling Green, an NCAA Division I program.

As an imported player, he has one thing working in his favor.

“The imports are usually faster than Europeans, so we use that to our advantage on the playing field,” he said.

Off the field, Jordan is going to do his best to travel and enjoy all Europe has to offer.

“Switzerland is a beautiful county with a whole different way of living, but they love some American Football,” he said. “I like seeing older villages, crossing the bridges and seeing the Rhine River. I’ve only been here for a little over four months so I’m just trying to take advantage of seeing most of the county and possibly traveling around Europe on bye weeks to see other parts of the world. Rome and Paris are two countries on the list.”

And about those dreams, Jordan has some advice for other players who may not be ready to give up the game.

“My main advice for young guys trying to get to a higher level of play, whether it’s varsity, college, or professional, is to never stop working and never stop dreaming because your name could be called on. Just be ready when they call your number.”

The Gladiators open the season on Saturday at the Winterthur Warriors.

Click here to add your Player Profile to our database.