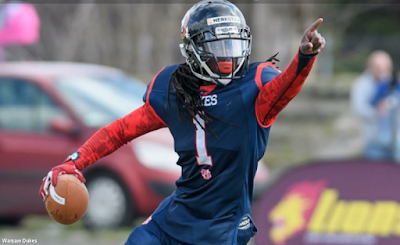 Avery Neloms began the 2018 season in Poland and he’ll finish it in Russia after signing with the Saint Petersburg North Legion in Europe’s 1st Division.

Neloms, a 28-year old quarterback who played collegiately at the University of Virginia at Lynchburg, also previously played for the Tampere Saints in Finland’s Maple League, the Warsaw Dukes and the Wyszków Rhinos in Poland.

“Russia actually happened by chance,” Neloms said. “Previously, I was playing with a team in Poland, by the way, which is a great country, I love that place, but the team I was on just wasn’t a good fit for me. A guy I had been in contact with for a while reached out to me and said that a team in Russia needed a QB ASAP. I immediately took the job. New country, new team, new atmosphere, new people, why not? Playing here so far has been unreal, the sportsmanship and the level of play were the most shocking to me so far.”

He threw for 25 touchdowns and rushed for six more for the Warsaw Dukes and was a candidate for the Polish League’s MVP award.

In Russia, he expects to play quarterback and later have the opportunity to play other positions.

“I believe in the near future I will be versatile and able to move around a little bit to the help the team,” he said.

The 6-foot-1, 185-pounder, joined North Legion shortly after the season started on March 25. He’ll remain in Russia through September.

“This is my third year playing in Europe and I like the fact that you can come over to a team and it doesn’t necessarily feel like a job,” he said. “The guys are open to listen and understand what you know to make themselves better. They soak up everything pretty quick and in return they treat you as one of their own.”

Playing in Russia certainly presents some challenges, including a language barrier, but Neloms expects to work his way through whatever he encounters while focusing on improving as a player.

His competitive nature drives him to be successful in anything he takes on.

“One of my biggest challenges this year is the fact that I have a winning mentality,” he said. “My first year in Europe, my team made it to the semifinals. The second year, we did the same, but I was injured the majority of the season so the Polish guys did all of the work, but we fell short in the playoffs. This year, I want to win it all. I’ve come close enough to where I know what it feels like and now I actually want to win a championship.”

North Legion has several other imported players, which has helped Neloms to settle in with the team.

“Before I came to the team, they had one of their players contact me, which is an American, but he’s been studying here for three years,” Neloms said. “He and I talked on the phone quite frequently as my signing process was going on, so that made it a little more comfortable. On top of that, we have two more Americans that play on defense, one of which lives in a city very close to my hometown.”

On the field, Neloms is ready to showcase his skills for a new audience.

“I’m a very versatile player with experience on both sides of the ball,” he said. “On top of playing QB, I also play receiver, corner and free safety. My knowledge and assets transfer over quite well because I know what to look for when lining up on either side.”

Click here to add your Player Profile to our database.